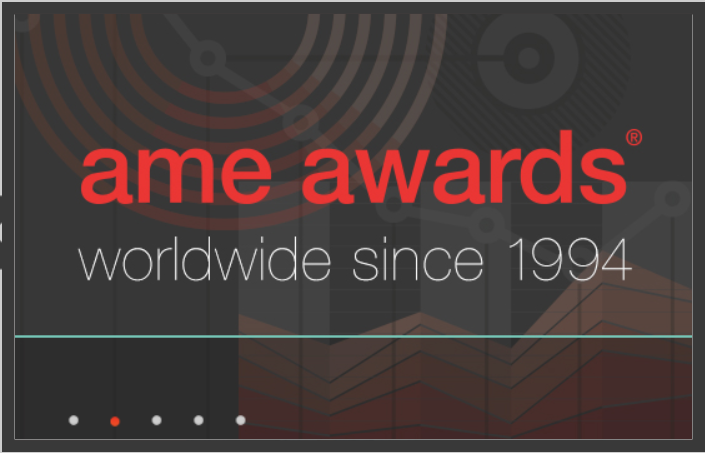 Serviceplan Group Germany earned the prestigious AME Grand Award for “DOT – The first Braille Smartwatch” (technology) for DOT. The winning campaign showcased the benefits of the Smartwatch technology that will change the lives of millions of blind and vision impaired individuals by connecting them to the mobile internet for the first time ever. The Dot garnered support from prominent visually impaired personalities including athlete Henry Wanyoike, singer Andrea Bocelli and musician Stevie Wonder, as well as cooperation with companies such as Google, Uber , educational institutes and the 2018 Paralympic Games in Pyeongchang. The campaign also earned 3 Gold AME Awards.

Alex Schill, Global CCO, Serviceplan Group had this to say about the agency’s success. “To win the AME Grand Award is an amazing honor for the whole agency! And the final proof that creativity is not something nice to have, but that creativity can truly change the success of brands today. And if related to a social cause even can change the world we live in.”

Dentsu Japan received top honors earning the 2017 AME Regional Platinum Award/Asia-Pacific for “Second Life Toys” for Organ Transplant. The winning campaign successfully created awareness on behalf of organ transplant operations by communicating with parents to increase the potential number of organ donors. Utilizing toys, they designed a process that was a “pseudo organ transplant experience” and communicated the meaning of organ transplant both logically and intuitively. The results—the project appeared on 1200+ media worldwide. Volunteers enlisted from over 19 countries. People willing to offer their organs for transplant increased 30%. People stating to use their organs for transplant increased 9%. People who spoke about the topic with their families increased 8%.

“We’re thrilled to receive such a prestigious award. I’d like to dedicate this award to everyone who has supported us to enable this project. We really hope that this project has made some difference to the world. May there be more lives saved through organ transplant.” —Togo Kida, Creative Director and Suzuki Akira, Creative Director, Dentsu Japan

Impact BBDO Cairo earned the 2017AME Regional Platinum Award/Middle East/Africa for “The Game Before the Game” for Chipsy. The agency increased brand share and awareness by partnering Lays (AKA Chipsy in Egypt) with the UEFA champion league. To combat that only 11% of Chipsy’s target audience followed the league, the agency utilized an activity to get the other 89% to care—predicting the score. Sports betting is illegal in Egypt, but buying Chipsy’s isn’t. Chipsy bags were printed with numbers that represented the total goals, and the consumer just had to match the total number of goals within the game to earn a prize. Within a month, they regained lost market share, saw a 24% increase in consumption, and increased sales by 14.6%. Additionally, it increased ‘Brand I Love’ KPI by +6 and “Interesting Brand” by +5m, along with 63M impressions, over Instagram 155,000 interactions. The campaign also earned a Silver AME Awards.

Zulu Alpha Kilo Canada was in the winner’s circle, earning the 2017 AME Regional Platinum Award for “Say No To Spec” for Zulu Alpha Kilo. The agency created a short film to show that spec work should be considered as absurd in the ad industry as it is in other industries. People, publications and companies around the world rallied behind their cause. With no paid media support, three days after its release, the film became the second-highest trending video on YouTube in Canada. In four days it received over one million views. To date the film has over 3,800,000 total views on YouTube and Facebook with 13.7 million impressions on Twitter. Since the film’s release the agency has received the most new business calls in their history. The campaign also earned a Gold AME Award.

TBWA Santiago Mangada Puno was recognized with the AME Green Award for “Dirty Watercolor” for client ABS CBN Foundation. To raise awareness for Manila’s polluted rivers and tributaries, the agency collaborated with artists to produce portraits of children and families living near the dead rivers using Dirty Water color, unique pigments created using water samples from Manila’s most polluted rivers. The finished art ran in an exhibit presented by ABS CBN Foundation attracting hundreds of visitors including the country’s top business leaders, artists, politicians, diplomats and patrons of the arts. The exhibit was featured on over a hundred websites, news programs and blogs around the world. All the artworks were sold, raising more than ₱1.3 Million. Without paid media support, the campaign generated 3.3 M views and 2.4 B potential reach within the 1-week campaign period amounting  to ₱6.1 M in media values. The winning campaign also took home 2 Gold AME Awards.

This is the first Green AME Award for the agency and ABS CBN Foundation. This award brings recognition to ABS CBN foundation’s efforts to rehabilitate Manila’s polluted rivers.  This also honors the untiring Filipino’s spirit and the emotions that color our lives despite difficulties,” said Bryan S. Siy, Executive Creative Director, TBWA\Santiago Mangada Puno. “Our agency’s philosophy is Creativity for Humanity.  Creativity is our purpose. It’s not measurable only by medals but more importantly, by the lives it has changed and the communities it has helped.   Thank you for this prestigious award.”

Award–winning campaigns were in the spotlight, rallying on behalf of civic awareness and championing worthy causes.

Ogilvy Germany struck Gold receiving 3 AME Gold Awards for client Mein Kampf, a non-profit association encouraging people to stand against racism. Their campaign “The tear-off-posters for ‘Mein Kampf – against racism’” fought back with a book, by taking the same title, they created a counter-book featuring 11 courageous strugglers against racism.

DDB Group Germany earned 2 AME Gold Awards for “Check it before it´s removed: Naked breasts against breast cancer” for Pink Ribbon Germany. The campaign featured 17 courageous German women who were photographed with one of their breasts exposed. On International Women’s Day, the photos were posted to selected social media platforms with the statement: CHECK IT BEFORE IT’S REMOVED. Because of Facebook and Instagram’s strict censorship policy against showing female nipples the public was encouraged to quickly re-share the photo before it would be censored and removed. In one day, the campaign generated 29 million media contacts and the equivalent of €2.2 million in earned media with a total media spends of €0.

HEIMAT, Berlin earned the Gold AME Award for “#PaintBack” for The Legacy Store for their campaign for a graffiti store that spread joy instead of hate by tackling Nazi tags by transforming them and creating a message of love. Artists showed kids and adults how take out swastikas and turn them into graffiti pieces of art. The city became their medium – and media coverage followed. The idea went viral immediately. #PaintBack spread globally reaching 100 million ad impressions, 5 million euro in earned media and more than 10 million video views.

BBH China Ltd was recognized with a Gold AME for “Happiness without Borders” for Harbin Beer, promoting its core belief in being “Happy Together” celebrated the power of sportsmanship by looking past the brand’s traditional borders and audience during the Olympic season. The content film brought to life the spirit of unity cherished and celebrated with Harbin Bee, increasing brand affinity with over 3.7 million online views in 72 hours, 1.26 million WeChat views, and 60,000 Weibo shares, 15,000 comments.

Award-winning entries employed both new technology and existing technology to increase engagement and boost brand identity, and even save lives.  Plan.Net/ Serviceplan Group Germany earned a Gold AME Award for “WhatsGerman” for Plan.Net  with  more than a million refugees arriving in Germany in 2015 that spoke no German, WhatsGerman offered the first-ever language course for refugees that upon registration with their smartphone provided a daily lesson. The results—over 80.000 people registered in the first six weeks. SapientNitro Australia earned the AME Gold for “Miami HEAT App” for client Miami Heat and created the ultimate fan engagement platform, with a league-changing app. Real-time customization based on interests, location and time learned from fan behavior and even got smarter overtime. In the two months after launch, app users spent an average 5:40 per session, watched over 120,000 videos, shared over 29,000 pieces of content, and bought over 43,000 tickets. And earning the HEAT more mobile revenue than every other team in the league—combined.

Serviceplan/ Serviceplan Austria earned a Gold Award for “Save Me – the ski pass that saves lives” for Ötztal Tourismus. Off-piste skiing and snowboarding are more popular than ever, but dangerous. Every year more than 5.000 people worldwide are buried by avalanches. During the search for the victims every second counts. Solution:

Save me – the first ski pass with a built-in positioning chip. With this every skier in the ski resort Sölden is automatically locatable. After an avalanche the mountain rescue immediately sends out a radio signal. The reflector in the pass returns it so the victim’s exact location can then be pinpointed.

All press inquiries should be directed to Gayle Mandel: gmandel@internationalawardsgroup.com, Ph: 1 212 643 4800