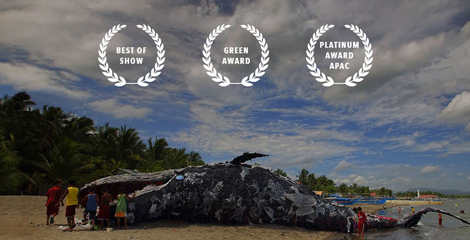 Dentus Jayme Syfu was a triple threat in this year’s AME Awards, earning the prestigious 2018 AME Best of Show Award, AME Regional Platinum Award/Asia Pacific, and the AME Green Award for “Dead Whale” for Greenpeace Philippines. The Philippine-based agency mounted an installation of a 73-foot decomposing “Dead Whale” on the shores of one of the most polluted cities in the Philippines during the 2017 ASEAN Summit. The whale was created using plastic wastes collected from the ocean. The award-winning entry’s stellar results included over 100 million impressions internationally and it caught the attention of ASEAN leaders, which put Coastal and Marine Protection in the proposal for the next Summit. The agency also garnered two AME Gold Awards for the entry.

“With our country, the Philippines, being ranked in the world to be the third biggest contributor of plastic trash in our oceans, it is only high time to create this kind of awareness for this serious issue. And, we couldn’t be happier with the results today. More communities and cities are helping in reducing the use of plastics. Our government has even become so environmentally conscious that it has plans of closing our world-famous beaches for a major clean up. A massive installation like this definitely generated massive action”, said Merlee Jayme, Chairmom & Chief Creative Officer, Denstu Jayme Syfu.

Australia’s Tonic The Agency earned 2 AME Gold Awards for “Bring Cinema Home” for LG Electronics. The agency’s campaign targeted 25-35-year-old Australians to promote LG’s 2017 range of OLED and SUPER UHD TVs focusing on the strength of their advanced imaging capabilities. A realistic pop-up LG Home Cinema in Sydney’s World Square provided an unforgettable red-carpet experience for visitors. The results— a 183% increase in sales of OLED TVs and a 315% increase in the sales of SUPER UHD TVs.

M&C Saatchi Australia’s AME Gold Award-winning “Migrant Banking” for client CommonWealth Bank. The agency created the campaign for the cultural context of Chinese and Indian migrants that was authentic and reflective of their respective cultures. Tapping into the love of cinema, a campaign was created using native languages and customs with CommBank becoming the first Australian company to target migrant communities through language in cinema. The result was a 61% increase in brand awareness and a 51% increase in brand consideration for CommBank among Chinese and Indian audiences who had seen the campaign.

Social platforms created buzz for W China’s “It’s Really Teeboolang” earning the agency the AME Gold Award for their campaign created to boost Timberland’s sales in China. The iconic brand name was changed into a Chinese name “Teeboolang,” identifying the brand as unbreakable sparking conversation and praise. The online campaign resulted in the name becoming a buzzword. On Tmall.com and Taobao.com, search index for “Teeboolang” increased by 52% and 22% respectively. Timberland saw an increase of 30% during “Double 11 Shopping Festival”, within 40 minutes at the beginning of the festival, all the yellow boots were sold out.  The video of “It’s Really Teeboolang” has been played over 16 million times.

A cutting-edge soap design placed Dentsu One Bangkok’s “Clean Light Hand Soap” for client Zantiis Bangkok Treasures Co. Ltd in the winner’s circle earning the agency the AME Gold Award. Aiming to prevent disease by raising awareness about the length of time spent washing hands, Zantiis created Clean Light Hand Soap, a soap bar that blinks for 20 seconds to make sure hands are washed for 20 seconds. In the first week, 500 bars of the total 1,500 soaps were given away and a video clip demonstrating a proper way to clean hands within 20 seconds boosted the engage rate of Zantiis Facebook page up to 1700%.

PHD China received the AME Gold Award for “Embrace the Extraordinary with OMO” for client OMO. Targeting millennial women, the campaign changed the way consumers see OMO from just a basic functional detergent brand to a modern and progressive brand encouraged young women to let go of the “fear of getting dirty” and to embrace surprises and possibilities for an extraordinary life. Market share of powder detergent increased from 1.84% to 4.61% in three months and liquid detergents – a more premium price point – increase from 3.03% share to 6.06% between April and July 2017.

Zulu Alpha Kilo Canada was in the spotlight earning the 2018 AME Regional Platinum Award/North America for “Common Ground” for Harley-Davidson Canada. The agency created a “foreign exchange of bikers” – documented in a series that followed riders from different backgrounds on a trip across Canada. The series proved so popular that Discovery Channel picked it up for a primetime special. The results—Over 47MM impressions; surpassing goals by 235%; over 8.7MM views surpassing goals by 218%, and over 415,000 engagements, and increase in market share of 1.9% against the nearest competitor. The agency also earned a Gold Award for the entry and an additional 2 Gold Awards, one each for “Story of Flash” and “A Balloon for Ben.”

“Canada is all about values like diversity, inclusion and acceptance. In creating the world’s first ‘foreign exchange for bikers’, we were proud to leverage our nation – bringing people from around the world to experience the open minds and roads of Canada on a Harley-Davidson. “

Team One Los Angeles, was in the spotlight earning the AME Gold Award for “Inking Our Mark on Motorcycle Culture” for client Indian Motorcycles. The campaign regained market share by leveraging a brand-first lifestyle media partnership and the world’s-first tattoo production technique formulated from the burn-out carbon from Motocross legend Carey Hart’s Indian Motorcycle. The results include 82% new visitors and Indian went from 7th to 2nd most purchased motorcycle brand in the U.S. The agency also drove consumer engagement and gained traction for client Lexis IS and earned the AME Gold Award for their campaign “Platforms of Expression for a Shareworthy Life.” The agency leveraged the Lexus entry-level sedan, IS to connect with younger affluents via social video and “thumb-stopping” content. The target audience was engaged, and the campaign became the most shared campaign in Lexus’ history, lowered the median buyer age for the brand, and generated the first month of positive YOY sales growth for IS in CY16.

T-Mobile USA’s “Next Gen” for T-Mobile earned the AME Gold Award for their campaign that brought the Un-carrier experience to life by humanizing and demystifying the wireless shopping experience. Customers were engaged via T-Mobile’s value proposition through a Human Digital experience that guides them through the purchase process and makes online shopping remarkably easy, resulting in 60% fewer clicks and 485% increase in web orders.

McCann Torre Lazur USA was honored with the AME Gold Award for “The Orange Project,” a youth-driven and youth-focused global awareness campaign to reduce the stigma of suicide and raise awareness for its prevention by collecting handwritten notes of encouragement and hope. The Orange Project spread their message and collected notes at live events such as Pride Parade in NYC and multiple Out of the Darkness walks sponsored by the American Foundation for Suicide Prevention. With the help of more than 30 schools, 11 live events, and 10 companies, The Orange Project has a goal to break the Guinness World Record for the largest album of handwritten notes (20,000 out of 30,000 notes have been collected) and empowering adolescents to help save the lives of people just like them.

Heimat Werbeagentur GmbH Germany was in the winner’s circle earning the 2018 AME Regional Platinum Award/Europe for “A New Way of Thinking” for Free Democrats. Young people in Germany thought the FDP was a party for old people and unable to reflect the needs of the future generation. The agency’s game-changing election campaign reached and activated young voters and bridged the gap between the Liberal party and the voters. PR Stunts and special events and created a unique digital identity: The Always-on Party in social media, generated continuous PR Buzz via highlights throughout the campaign. The digital campaign resulted in FDP returning to the German parliament with the party’s highest rise ever in number of votes (5,9%), even while having the smallest campaign budget among the six major parties. The entry also earned an AME Gold Award.

“We are honored, that HEIMAT received this important efficiency award for this case –especially because it represents what is perhaps one of our core areas of expertise: long-term brand building.” Matthias Storath, CEO/Chief Creative Officer and Creative Director/FDP case, Heimat Werbeagentur GmbH.

Serviceplan Group Germany was recognized with two AME Gold Awards, one for “The Truth Unveiled for IPRAS WomenforWomen, an initiative that helps acid-attack victims with plastic-surgery. The agency collaborated with Asma, a woman who was scarred in an acid-attack as a child. On International Women’s Day, she hosted a special report, where for the first time an acid attack victim unveiled her scars on national news and appealed for help. Over 100,000,000 people witnessed the event. Serviceplan’s “Give Bag” was also honored with a second AME Gold Award for supermarket retailer PENNY. Customers save 10 Cents every time they bring their own Give-Bag bag. and PENNY donates an additional 10 cents to local social organizations. The Give-Bag launch sold-out 600,000 bags within only a few weeks. The clients saved over 70,000 € and spared the environment of over one million disposable bags.

Radley Yeldar UK was honored with a Gold AME Award for “The Data Dollar Store” for client Kaspersky Lab. The agency created a pop-up store to increase brand awareness within the 21-35-year old demographic. Fans of artist Ben Eine’s work could take home merchandise for data dollars such as one-off prints, t-shirts or mugs if they were willing to hand over private photos, emails or instant messaging conversations that would then be displayed on digital media screens for all of Old Street Station to see. The impact—a geo-targeted Facebook ad campaign generated a total of 2.4 million impressions – 1.86 million of which were organic, resulting in a cost per view of $0.01 – outperforming the target by 1,000%. The campaign achieved over 330 million earned media impressions in outlets like Time Out, Huffington Post, the Evening Standard and Hello! Magazine.

All press inquiries should be directed to Gayle Mandel: Gayle.Mandel@NewYorkFestivals.com

The Jeff Bezos Empire in One Giant Chart