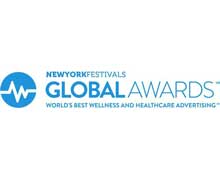 For the past 23 years, the international Global Awards has honored the World’s Best Healthcare & Wellness Advertising℠ and has served as a touchstone for celebrating creative achievement in healthcare and wellness communications beyond the barriers of language and culture.

The Global Awards Grand Jury shortlisted 154 entries this year submitted from 22 countries worldwide. Entries achieving shortlist status will be judged by the 2017 Pharma (Rx) and Health & Wellness Executive Juries in a live session in New York City to determine trophy winners. The 2017 award-winning entries will be announced at the Global Awards ceremonies on November 16th in New York City and Sydney, Australia.

Entries utilizing ambient advertising achieved Finalist status.  The Classic Partnership Advertising’s (UAE) “Footnote for The Breast” for Medcare Women & Children Hospital wanted to raise awareness on the importance of health check, especially amongst local and Arab women.  The campaign tackled the issue of taboo: while some health conditions may be taboo to talk about, there shouldn’t be any taboo for checking. Pebbles were placed in the shoes of women who went to mosques or prayer halls, and when they returned and put on their shoes, the “lump’s” message urged women to respond by calling Medcare’s Toll-Free number to schedule their free-of-cost consultation.

Additional uses of ambient advertising include: FCB Health USA “Gay Blood Dumpster” for Gay Men’s Health Crisis (GMHC) – the agency constructed a large art installation in Chelsea for PRIDE, New York that featured two dumpsters packed with “Gay Blood” to signify how discrimination dehumanizes a community while simultaneously wasting 617,000 pints of potential donor blood every year! The Bloc USA “Hearing Voices of Support Interactive Art Installation” for Schizophrenia and Related Disorders Alliance of America, created an immersive interactive art installation for Schizophrenia Awareness Week that featured sensor plates throughout the gallery activating light beams and triggering sound and a video projection of a person speaking, reminiscent of auditory hallucinations but with a twist–the voices were positive. Gallery visitors heard positive stories told by affected people talking about what helps them. People surveyed who experienced the event showed a shift in perception and increased empathy, with more than 80% wanting to do more to help people affected by a schizophrenia-related illness.

Humor drove multiple entries to the trophy round: McCann Health Australia “Poo Romance” for client Metamucil utilized an ironic love story between a giant walking brand icon – a Metamucil jar, and a walking poo to engage pharmacists and consumers. The creative brought to life health messages and raised talkability about a sensitive subject. Ogilvy CommonHealth Australia “The Stool Expert” for client Coloxyl tackled the embarrassment of constipation by introducing Stefan, a stool expert who captures that elusive spot between humor and respect, educating the consumer on the using correct terminology ‘stools’ without embarrassment and with expertise. Results include 400 earned media placements yielding 350MM+ impressions.

Weber Shandwick’s “The Debate Headache” for client Excedrin conducted a social takeover on twitter. During the 2016 US Presidential Election custom head pain relief kits were delivered to top journalists with a tease that a big headache was coming. The morning of the debate, social takeover began on Twitter via a Promoted Trend with the message: “The possibility of a #DebateHeadache is high, Be prepared with Excedrin.” Within hours of the first tweet, media coverage appeared in consumer/lifestyle, business and marketing publications, national/local broadcast—results include 400 earned media placements yielding 350MM+ impressions, 180,000+ engagements across social platforms and more.

The United States took the lead in this year’s Global Awards competition with 78 entries achieving Finalist status. Australia saw 20 entries moving on to the trophy round, followed by the United Kingdom with 19. India moved forward with 7 entries and German agencies saw 6 entries advance. Japan advanced with 5, the United Arab Emirates and China each saw 4 entries move forward. Hong Kong, New Zealand, and Italy each saw 2 entries advance and Brazil, France, Jordan, Spain, and Sri Lanka moved forward with a single-entry.

The Global Awards will celebrate the 2017 award-winners with celebrations in Sydney, Australia at The Rawson hosted by Bravo!/Global Awards and in New York at The New York Academy of Sciences. All winners and attendees are invited to jet to the show of their choice on Thursday, November 16, 2017. For Sydney ceremony details visit: HERE, and for New York ceremony details visit: HERE.  Tickets for the award ceremony will be available for purchase this week.

For more information, please visit the Global Awards at www.theglobalawards.com.

All press inquiries are welcome and should be directed to Gayle Mandel: gmandel@internationalawardsgroup.com. Phone 212 643 4800

VietnamMarcom is the country representative for IAG in Vietnam