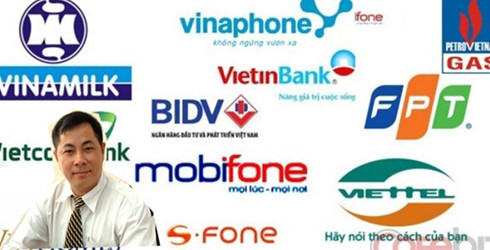 A brand is important because customers define themselves by the brands they use whether it’s the clothes they wear, the motorbike or car they drive, the university they attend or the stores they shop.

Just as we all know that Mercedes-Benz automobiles drive with German efficiency, we all know that at some point company brands and national identity merges. This, of course, is the impetus for the government’s National Brand Program.

Other examples would be that of McDonald’s, Walmart and Microsoft who are highly visible and famous US brands for which millions of consumers around the globe instantly merge company and national identity.

Strong company brands in concert with an equally powerful national brand are a winning combination for Vietnam to attracting higher levels of foreign direct investment, recruiting the best and the brightest young talent and keeping the country’s economy healthy.

Most notably, it is important for the national band to be representative of the country’s history, geography, and ethnic motifs and imbue a sense of national identity and uniqueness.

This year, 88 businesses across the spectrum of business segments were ceremoniously presented National Brand Awards in Hanoi, for which 23 have now won the title for past five consecutive years.

At a reception at the Presidential Palace in Hanoi for the winners, President Tran Dai Quang spoke highly of their efforts to improve their brand in concert with the national brand of Vietnam affirming their contribution to the country’s development.

He encouraged them to forge ahead with their business ventures and continue to pursue building a brand image of quality, innovativeness and creativity.

Smart firms, he reminded them, pour most of their money into improving their brands, focusing more on the values and emotions that customers attach to them than on the quality of the products themselves.

Since markets are flooded with indistinguishable, mass-produced items, Vietnamese companies must individualize the goods they are selling to their customers by associating them with both the company and the Vietnam national brands.

As such he reminded the companies that their brand efforts must push a lifestyle or a sophisticated image that connects with the emotions of global consumers rather than just a rather bland piece of clothing, or textile, agriculture product, food item, or shoe.

In other words, President Quang was suggesting companies promote themselves and Vietnam collectively as a ‘green country’ for example, to attract environmentally conscious individuals and foreign direct investment.

Or emphasize the image of Vietnam as a global hub for the media, design, music, film, and fashion industries as opposed to just being a low-cost labour pool for manufacturers of clothing, textiles and shoes.

This is what the National Brand Awards program is all about. It’s a long-term, cumulative effort spanning decades to make the country seem very fashionable, enterprising, modern— and stand out from the crowd.