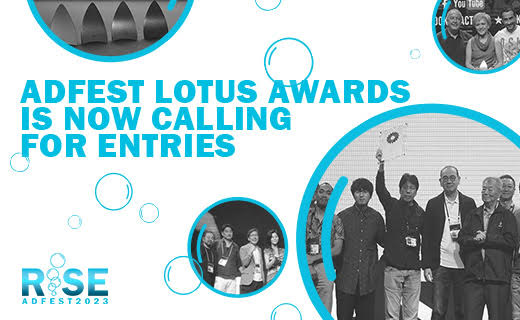 ADFEST has announced it is now accepting entries to the 2023 Lotus Awards for its upcoming ADFEST 2023 festival, under the theme “RISE,” which will be held at PEACH, Royal Cliff Hotels Group in Pattaya, Thailand from Thursday 23 – Saturday 25 March 2023.

ADFEST ’s most prestigious categories are the Lotus Roots and the INNOVA Lotus. ADFEST has long embraced diversity and celebrated cultural uniqueness with its introduction of Lotus Rootssince 2011, specifically to recognise the richness and values of local culture. The INNOVA Lotus celebrates the most innovative ideas that create impact and push into unchartered territory.

The Commerce Lotus, formerly the eCommerce Lotus, expands to include offline commerce in addition to eCommerce to celebrate creative and innovative solutions that enhance the consumer experience at source and drive business sales. The Digital & Social Lotus, formerly Digital Lotus, introduces new sub-categories to reflect the fast-changing landscape of the digital world and social media.

SPECIAL AWARDS
ADFEST is also adding PR Agency of the Year to its Special Awards line-up.

The ADFEST 2023 Special Awards now include:

Entry Submission Deadlines:
Early Bird Deadline Friday 16th December 2022
Regular Deadline Friday 13th January 2023
Entry fees after each deadline will increase by THB2,000 per entry.ADFEST is a non-profit-making entity that believes passionately in its role to nurture and support the creative industry in the Asia Pacific and MENA region. It is one of only 8 regional creative festivals included in the WARC Creative 100 Rankings.Save the date of 23 – 25 March 2023 and “RISE” with us at ADFEST 2023!