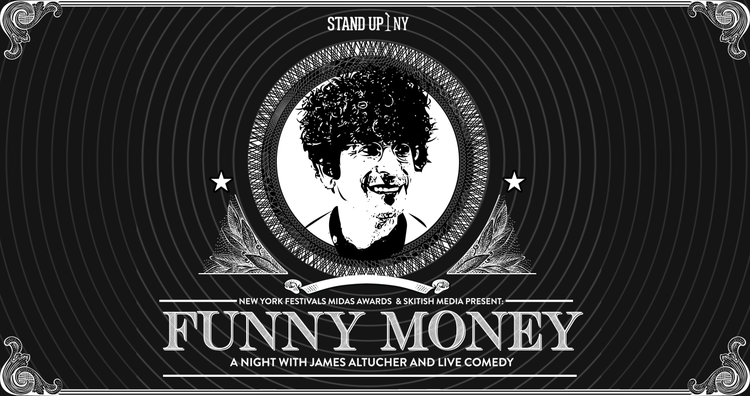 Join the Midas Awards and Skitish Media on September 27th at 6pm at Stand Up NY for an evening of cocktails, hors d’oeuvres and networking and entertainment. The entertainment kicks off with James Altucher, founder of Reset Inc. and co-founder of StockPickr sharing his personal insights on branding and continues with hilarious sets performed by three of the comedy world’s most talented and recognized young comedians.

“This event is an opportunity for creatives and executives who work in financial advertising as well as on the brand side to take an evening off, connect with their peers, hear James’ perspectives on branding and perhaps take life a little less seriously with the help of these talented comedians,” said Scott Rose, Executive Director, Midas Awards.

Altucher will take to the stage to discuss his unique views on Branding based on his experience as a successful entrepreneur, investor, and writer. He has started and run more than 20 companies, some which failed, several of which he sold for large exits, in addition to also running venture capital funds, hedge funds and angel funds. “Effective branding is about doing,” said James Altucher, “it’s about showing that the brand and the customer can communicate honestly, that they understand each other and that they relate by speaking directly to each other in a two-way conversation. Brands can create conversations by being their authentic self, by showing their true personality, by honestly revealing what’s important about the brand and what is of interest to their audience. Tools like youthful advertising and comedy have proven to be instrumental in creating an authentic conversation and developing a relationship with consumers where brand speak and listen.”

The author of eleven books including the motivational bestseller, “Choose Yourself,” Altucher has inspired people both in person through hundreds of events and through weekly Q&A Twitter sessions on topics including money, stress, fear, and much more. His writing has appeared in major national media outlets, including the Wall Street Journal, ABC, Elephant Journal, Tech Crunch, Forbes, and CNBC. Altucher’s blog, The Altucher Confidential, has attracted more than 10 million readers since its launch in 2010.

Stand Up comedian, Yamaneika Saunders has been featured on NBC’s Last Comic Standing and AXS TV’s Gotham Comedy Live, and competed on Season 2 of Jeff Ross’s Roast Battle on Comedy Central. She co-starred in Oxygen’s Funny Girls, a docu-series. Saunders was a series regular on Comedy Central’s animated online series In Security and has been a guest star on numerous shows including: The Jim Gaffigan Show, Comedy Central’s The Nightly Show with Larry Wilmore, and TruTV shows Comedy Knockout and Friends of the People. Her voiceover work can be heard on Inside Amy Schumer.

Comedian Joe List has been featured on Conan, The Late Show with David Letterman, and was a finalist on NBC’s Last Comic Standing. List had his only half-hour comedy special on Comedy Central and his albums ‘So Far No Good’ and ‘Are You Mad at Me?’ can be heard regularly on Sirius Radio. In 2016, he opened for Louis CK on his international tour throughout the USA and Europe including three performances at Madison Square Garden.

Mark Normand, won Caroline’s, NYC’s premier comedy nightclub, March Madness competition winning the top comedian slot over 63 other comedians. Normand has performed in his own Comedy Central half-hour special, appeared on The Tonight Show with Jimmy Fallon, TBS’s CONAN, as well as INSIDE AMY SCHUMER, TruTv, Best Week Ever, Last Comic Standing, and @Midnight. He released a Comedy Central album titled “Still Got It.”  Voted the Village Voice’s “Best Comedian of 2013”, Mark appeared on “John Oliver’s New York Standup Show” in 2012 on Comedy Central and was picked as one of Comedy Central’s “Comics to Watch.”

Skitish Media is Midas’ partner in Funny Money. They are a creative agency located at Stand Up NY Comedy Club. Skitish leverages its deep roster of comedic talent to create engaging and funny content for brands.

For more information on Funny Money or to attend, please contact Midas Awards Executive Director, Scott Rose at  Scott.Rose@NewYorkFestivals.com or (212) 643 4800.

The deadline to enter the 2017 Midas Awards is September 29th, 2017. Entry details, including competition categories and rules and regulations can be found on the Midas Awards website.

Press inquiries are welcome and should be directed to Gayle Mandel: Gayle.Mandel@NewYorkFestivals.com .

About the Midas Awards

Founded in 2001, the Midas Awards® is the only competition to recognize excellence in financial advertising and marketing on a global scale, honoring the World’s Best Financial Advertising℠ in banking, brokerage, insurance, mutual funds, credit cards, real estate, accounting, and consulting. The competition invites entries in four specific categories: Products & Services, Craft, Use of Medium, and Use of Discipline.