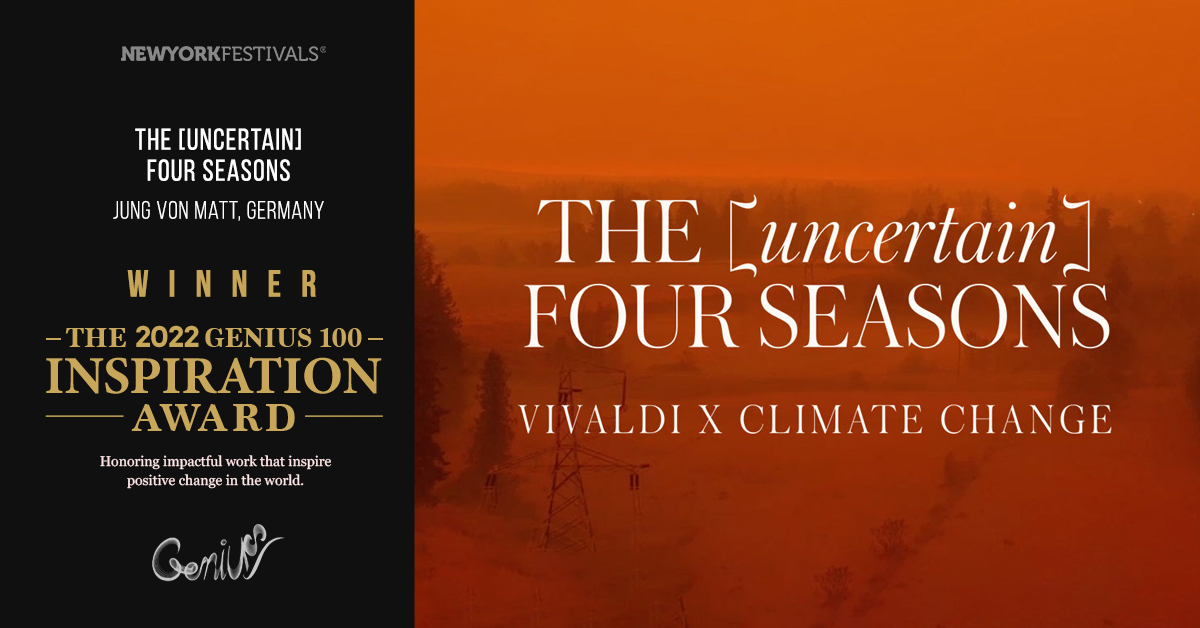 “NYF is proud to partner with the Genius 100 Foundation to honor work that engages and inspires others to take action and influence our world in a beneficial manner,” said Scott Rose, Executive Director, New York Festivals Advertising Awards.

“We are honored to partner with New York Festivals Advertising Awards to present the G100 “Work of Genius” Inspiration Award.  We (G100) are “Inspired by Einstein”, and this very special award celebrates truly inspired, imaginative work which demands attention and fosters undeniable and significant impact,” said Hilarie Viener, Chief Executive Officer, Genius 100 Foundation US. “Now more than ever, we must recognize how much we can gain from embracing creativity to influence positive change.”

“We are deeply honored to win this highly prestigious award. The Genius 100 Inspiration Award is not only about purpose-driven creative work but also about impact to inspire people to act. To have 14 orchestras around the world playing their local version of The [Uncertain] Four Seasons is truly remarkable and outstanding. And we are so happy that more orchestras still join our beloved project with more performances taking place right now and in the near future.”— Joachim Kortlepel, Executive Creative Director, Jung von Matt AG, Germany

The award-winning campaign combined music theory and a climate algorithm to generate variations of Vivaldi’s Four Season’s composition that represent the dramatic environmental climate changes affecting each season. The algorithm altered the music score to account for predicted changes in rainfall, biodiversity, sea-level rise, and extreme weather events as laid out in the IPCC (Intergovernmental Panel on Climate Change) reports. The composition variations portrayed a future where the world failed to act decisively on global warming.

“For us the challenge and the struggle when talking about climate change is how we translate data into the lived experience. We believe that we need to humanize climate science and climate data so that we can connect more with people. The [Uncertain] Four Seasons is our emotional attempt to show climate data in a new way that people will not only understand but feel. After all, we’ve seen all the climate crisis pictures, watched all the climate documentaries and seen all the data science graphs – our hope is that by reflecting the risks of climate change in music – as the one universal language everybody speaks – we can help people experience what a radically new aesthetic and lived experience might feel like. Finally, we wanted to offer something that local communities could collectively rally around, discuss, and take direct action through their leaders or the UN’s ActNow platform,” said Joachim Kortlepel.

“The [uncertain] Four Seasons” campaign’s goal was to place pressure on world leaders to act decisively at the United Nations Climate Change Conference COP26 that took place in November 2021. At the start of Youth and Public Empowerment Day at COP26 on November 5, 2021, “The [uncertain] Four Seasons” released the performances of 14 orchestras from across 6 continents – half of which are youth orchestras. The performances elevated the voices of young people in the ongoing movement for climate action and placed and continues to place further pressure on world leaders to sign the Leaders Pledge for Nature and commit to reversing biodiversity loss by 2030.

The Genius 100 Foundation brings together visionaries, philanthropic impact investors and its extended global community, collectively and in collaboration, to: re-imagine the future and implement creative initiatives to improve our world.

Entries into the Genius 100 Inspiration Category were reviewed by the New York Festivals Grand Jury. The top scoring entries were then judged by the Genius 100 Executive Jury.

All entry fees for work submitted into the Genius 100 Inspiration Award category will be donated to the Himalayan Cataract Project (HCP).  The Genius 100 Foundation (G100) Gift of Sight Campaign will support the work of the Himalayan Cataract Project (HCP) by partnering with the HCP, founded by G100 Visionaries, Dr. Sanduk Ruit and Dr. Geoff Tabin. Their mission is to eradicate preventable and curable blindness in the developing world.

Entries to each of the competitions are judged around the world by panels of peers in their respective industries. For more information, go towww.newyorkfestivals.com.

About the Genius 100 Foundation
Genius 100, referred to as G100, was born out of the centennial celebration of Einstein’s Theory of Relativity (2016). To honor this landmark occasion, 100 of the world’s greatest minds were researched, selected, and nominated to contribute their vision of the future to the publishing of the first 3D book” Genius: 100 Visions of the Future.”  Founded in Toronto in 2017, with a global footprint, Genius 100 Foundation is an active and engaged community of exceptionally imaginative and impactful human beings. The Genius 100 Visionaries are comprised of an extraordinary group of 100 globally recognized, accomplished, compassionate minds. The Genius 100 Foundation brings together Visionaries, philanthropic impact investors and its extended global community, collectively and in collaboration, to re-imagine the future – implement creative initiatives to improve our world – raise the bar on what is achievable and make the impossible – possible.  www.genius100visions.com

The Genius 100 (G100) Visionaries are comprised of an extraordinary group of 100 globally recognized, accomplished, compassionate minds. This group of global leaders, activists, innovators and influencers, in addition to 16 Nobel Laureates, includes Astronauts, an EGOT, Olympic Gold Medalists, Knight(s) of the British Empire, Commandeur de l’Ordre des Arts et des Lettres of France, Companion(s) of the Order of Canada, a former NASA Administrator, Justice of the Supreme Court of Canada – and recipients of National Medals of Science, Humanities and Arts; Pulitzer Prize; Peabody Award; Albert Einstein Medal, and many more accolades and honors.

The Genius G100 Foundation Mission
We leverage the knowledge and resources of the G100 community to support impactful humanitarian and environmental initiatives through collaboration and funding structure.