Japanese companies must get out of their comfort zone 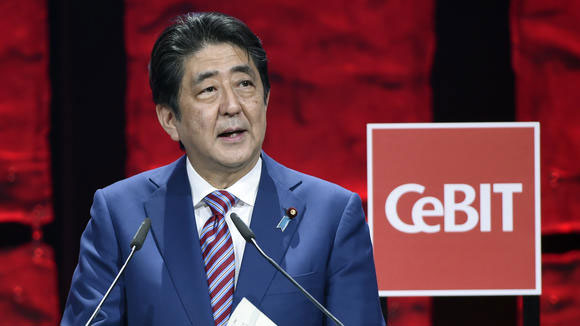 TOKYO — For the first time since the 1990s, Japanese companies made a big splash at CeBIT, the largest information technology trade show in Europe, which was held in the north German city of Hannover last week. It is time for the exhibitors to take on the world.

“Japanese companies are here, in a massive number, which is 118, a jump of more than tenfold from the previous year,” Japanese Prime Minister Shinzo Abe boasted at the opening ceremony of the expo. In the recent past, there were only around 10 Japanese companies and organizations displaying their wares. At this year’s show, there were 118. Abe took advantage of an invitation from German Chancellor Angela Merkel to attend CeBIT as the partner country and highlight Japan’s industrial might.

At the urging of Abe and other Japanese officials, a number of big names signed up, including Nippon Telegraph and Telephone, NEC, Hitachi, Toyota Motor and Panasonic.

Abe toured the expo with Merkel, walking from booth to booth and promoting Japanese brands. But it was not all boosterism. The Japanese government and participating companies are already thinking about next year.

Switzerland, last year’s partner country for CeBIT with over 80 exhibitors, had a similarly strong mission of 66 exhibitors this year. China, which took the leading role before Switzerland, had a huge contingent this year, with 579 companies taking part, including those from Hong Kong and Taiwan. In total, Chinese booths made up about 20% of the exhibitors.

The Japan Pavilion, set up by the Japan External Trade Organization, had 7,200 sq. meters of space at the venue, also up more than tenfold from last year. But Huawei Technologies, China’s biggest telecommunications equipments company, had nearly half as much space as the entire Japanese pavilion — 3,500 sq. meters — all to itself. “I realized how closed we were,” said an employee of a major Japanese manufacturer who visited CeBIT for the first time.

Until the 1990s, Japanese companies were the stars of CeBIT in terms of quantity and quality. But as their lead in areas such as laptop computers began to shrink, they were eclipsed by overseas rivals. The growth of the internet shifted people’s attention from hardware to software. Japanese manufacturers became less competitive and began pulling out of the expo in ever larger numbers.

Now the picture is brighter. “The arrival of the age of the internet of things offers Japan a chance for revival,” Konica Minolta President Shoei Yamana said, in reference to a network of web-enabled devices. The electronics maker withdrew from CeBIT in 2006 but returned three years ago in anticipation of the internet-of-things wave. At this year’s exhibition, the company showed off its new, cloud-based multifunction copier for the global market, dubbed Workplace Hub.

Why China is beating the U.S. at innovation