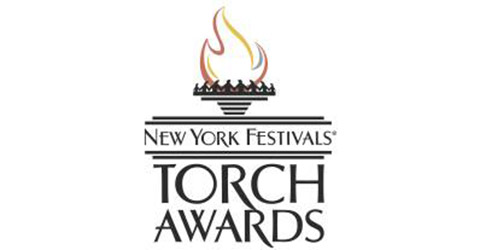 New York Festivals created the Torch Awards as an expression of their commitment to the development and promotion of the next generation of creative talent. The competition harnesses the power, knowledge, and experience of the World’s Best Advertising® Jury to not only promote the mission of an important international nonprofit organization, but also to help young creatives gain skills that will help them elevate their careers.

Each year, the Torch Awards partners with a nonprofit organization and presents a competition for 18-27 years olds that explores a creative challenge with real-world potential. Young creatives around the world have the opportunity to submit their idea for tackling the needs and goals of the nonprofit as described in a challenge brief. This year’s challenge is the Integrated-Mixed Media Challenge.

For the 2017 Torch Awards, New York Festivals has partnered with Today, I’m Brave, a registered non-profit that celebrates people performing Brave acts every day and everywhere. New York Festivals proudly supports their mission to inspire bravery and champions their philosophy that “No act of bravery should be ridiculed, marginalized, or minimized, which is why no act of bravery is too small or too big for us. Inspiration can come from all walks, all creeds, all deeds, all corners of the Earth, and all of us, individually and collectively.” Their purpose is to inspire bravery within individuals and organizations alike by supporting Brave initiatives and sharing Brave stories from around the world.

“We are thrilled to partner with Today I’m Brave and believe in their inspiring message,” said Lisa Armstrong, director, New York Festivals Torch Awards. “This is a fantastic opportunity for both the Torch Awards and its entrants to join forces with this international nonprofit that champions bravery.”

Young creatives entering the Integrated-Mixed Media Challenge will develop and pitch an idea for an integrated-mixed media campaign to promote the international release of the Today, I’m Brave book in August 2017. Today, I’m Brave has been built with a wide variety of stories, videos and pictures of people’s daily courage to face their fears and to create great change in their lives. Now the public will be able to read the inspiration behind the movement with specific ways to adapt Brave actions in their own lives. The Grand-Winning Team will have the chance to further develop their idea with Today, I’m Brave and see it go live.

Five Finalist Teams are chosen from all the submissions received and called to New York City to pitch their campaign idea to a panel of jurors, which includes representatives from the nonprofit. To help them prepare, each team is paired with a mentor selected from the New York Festivals® Jury—some of the most influential leaders within the international advertising community.

The 2017 Torch Awards submission deadline is February 17th. Finalist teams will be announced on April 3rd.   The Grand-Winning Team will be announced and awarded live at the New York Show℠, taking place May 18th at Jazz at Lincoln Center’s Frederick P. Rose Hall in New York City.

For more information or to enter please visit the Torch Awards website.

About The Torch Awards
New York Festivals® created the Torch Awards as an expression of our commitment to the development and promotion of the next generation of creative talent. We’ve harnessed the power, knowledge, and experience of our World’s Best Advertising℠ Jury to not only promote the mission of an important nonprofit organization, but also to help young creatives learn some of the most difficult exercises in the advertising industry.