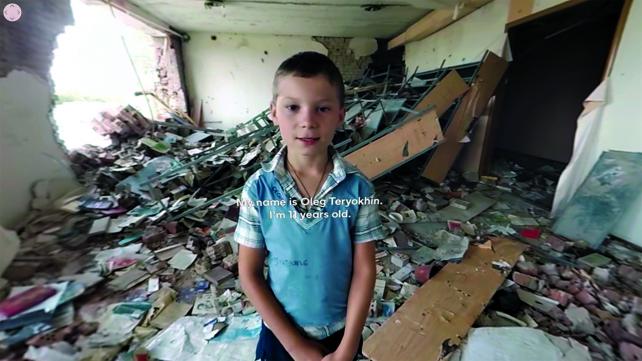 Ad Age sibling site Creativity gathered some of the past year’s best VR ideas in marketing — some of which didn’t even require a bulky headset.

This delightful idea took a group of lucky school kids on a “bus ride” to Mars, in what the agency McCann New York billed as a “group virtual reality experience.” Working alongside Framestore‘s VR division, the agency painstakingly outfitted a real bus with windows that displayed, via VR technology, views that mimicked a trip around the red planet, displaying 200 square miles of Martian surface. Turns out, the children were really traveling to Washington D.C.’s USA Science and Engineering Festival.

Times VR and The Displaced

The New York Times opened up a whole new avenue of content when it introduced its VR app. The paper distributed 1 million Google Cardboard headsets to readers, who were invited to download the app, through which they could view “The Displaced,” a moving documentary tale of how war has displaced 30 million children from their homes. It was directed by Imraan Ismail and Times journalist Ben C. Solomon and produced out of Vrse.works (now called Here Be Dragons). The app earned the Mobile Grand Prix at Cannes, while “The Displaced” earned the Cannes Entertainment Lions Grand Prix as well as “The Most Next” Award at AICP.

Fans of USA Network’s dystopian thriller “Mr. Robot” got a deeper dive into the head of the show’s protagonist, Elliot Alderson, in this VR experience that debuted as a limited-run event during San Diego’s Comic-Con. Show creator Sam Esmail conceived a story that allowed the audience to get high with Elliot and experience a bit of the backstory for his relationship with drug dealer/love interest Shayla Nico.

Produced out of Here Be Dragons and distributed through the Within app, the project throws viewers into some uncomfortably intimate moments—including an act with the couple on a Coney Island Ferris wheel that turns psychedelic in an iPod ad-reminiscent interlude. The VR tale debuted as part of a broader experiential extravaganza that included a real-life recreation of Elliot’s bedroom and the show’s iconic repair shop. (Creators offered fans free Uber rides to the location in a “Mr. Robot”-themed van.) Viewers were initially encouraged to watch all at the same time before it was uploaded permanently to Within.

Since VR typically requires you to wear a bulky helmet, it may seem an unlikely platform for a beauty brand. But Korean company Innisfree leveraged the technology to promote its eco-friendly positioning with a fanciful VR bike ride that took consumers on a jaunt through the country’s Jeju Island, known for its natural wonders. Participants pedaled atop exercise bikes to enhance the experience, which took them on a flying tour and invited them to sweep up green tea leaves and flower blooms. Perhaps one of the smartest aspects of the campaign was the placement—within the brand’s location at the Shanghai Disney Resort shopping center, where visitors presumably are already primed for such amusement. The idea was created out of PostVisual, part of the JWT network.

This fantastic experience for Florida’s Dali Museum from Goodby, Silverstein & Partners throws viewers into the surreal world of one of Salvador Dali’s early paintings, “Archeological Reminiscence of Millet’s ‘Angelus'” from 1935. It takes participants through the work’s foreboding, barren landscape, zooming into and around a pair of looming rocky monoliths and past long-legged elephants and hovering ravens. It was a fresh, entertaining use of the medium that helped to educate in the unexpected category of arts institution marketing.

Although explosive news about the Galaxy Note 7 has dominated the Samsung conversation of late, the brand is arguably one of the smartest and most experienced marketers in the VR space, with executions that allowed people to go shark diving and even helped a far-flung father watch the birth of his child. More recently, the brand helped traveling parents return home, virtually, to read their kids a bedtime story in a campaign from BBH London and Unit9. Bedtime VR Stories is an app that brings separated families together to share an immersive, storytelling experience through VR and VOIP (Voice Over Internet Protocol). The story unites parent and child in a whimsical tale in which they encounter characters like Dan the Dinosaur, Jen the Penguin and Robot Jo—taking them all the way from the arctic into outer space.

20th Century Fox made its commercial debut in VR by placing users in the spacesuit of Matt Damon—as astronaut Mark Watney from “The Martian.” It’s a 25-minute trip in which participants, like Watney, have to work fast to ensure their own survival—whether they’re trying to recover plutonium without exploding to bits or ejecting themselves from the Mars Ascent Vehicle in the hopes of getting back to Earth. 20th Century Fox along with Fox Innovation Lab, Ridley Scott’s RSA Films and The Virtual Reality Company partnered to create the project. Mr. Scott was executive producer alongside Robert Stromberg, who also directed the VR experience.

Digital health platform ZocDoc, along with Office of Baby, came up with a brilliant idea to calm people waiting at the dentist. They placed VR headsets in the waiting area so anxiety-ridden patients could be transported to a more relaxing venue such as a yoga retreat or lily pond. The brand’s positioning is about making the healthcare experience better online, so “we really wanted to bring some of that ethos into the real world,” said Office of Baby Chief Creative Officer Paul Caiozzo.

This supercool stunt showed how Dramamine could alleviate one of the familiar “side effects” to VR technology: nausea. Dramamine and agency iStrategy Labs put five unlucky sufferers of motion sickness through an extreme stomach challenge that paired an insane VR experience involving rolling coasters, fighter jets and superhero-style fly-throughs with gear that simulated taking their bodies along for the ride. But the participants came prepared. Each took a dose of Dramamine beforehand, and, according to the spot that captured it all, everyone came away feeling just fine.

One of the most powerful aspects of VR is how it helps to enable empathy in those who experience it. That’s palpable in this work from The Guardian and created alongside the Mill’s content studio. It sought to shine a light on the realities faced by the 80,000 U.S. prisoners in solitary confinement, who spend 22 to 24 hours a day with no human contact. The experience “traps” the viewer in a cell while playing the voices of real-life prisoners and psychologists discussing the harrowing effects of such imprisonment. Water dripping, doors slamming and even the scrawls on the cement walls add to the claustrophobia.